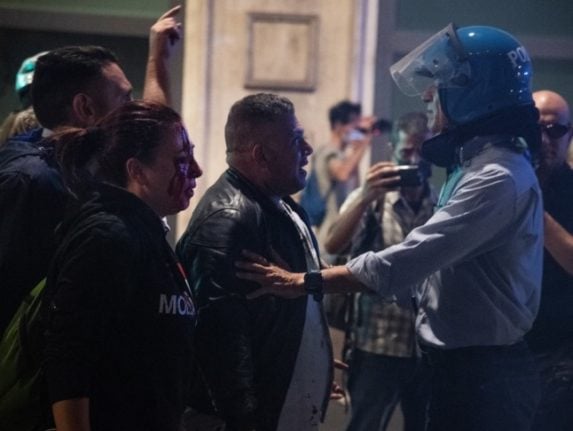 An Italian protestor squares up to riot police during protests against the 'green pass'. Far-right thugs have been arrested. (Photo by Tiziana FABI / AFP)

Thousands of people gathered to demonstrate against anti-coronavirus measures in central Rome on Saturday, with some protesters later clashing with police.

Members of Forza Nuova took part in the demonstrations before reportedly wrecking premises including the headquarters of the CGIL trade union federation, which the group attacked and occupied.

Police deployed water cannon and tear gas to disperse crowds over several hours of unrest, as several hundred people broke away from the main demonstration and attempted to reach the.prime minister’s office.

Italian media reported that 38 police officers were injured in the clashes.

A number of photos and videos have emerged of mostly male protestors giving fascist salutes.

The demonstrators chanted anti-govt songs while doing the fascist salute (image below from a demo in May 21 organised by forza nova against "heathcare dictatorship". Ah the irony) 3/4 pic.twitter.com/ddivhrclBb

“The people behind the assault on CGIL’s headquarters were quickly arrested. They had been stoking tension and violence for too long,” said MP Federico Fornaro.

Formed in 1997, the neo-fascist party Forza Nuova calls for an abortion ban, a total halt to immigration and the repeal of hate speech laws.

It has never achieved a score of even 0.5 percent at any election, even when allied with other far-right groups.

Mostly centrist and left-leaning politicians have now called for it to be banned.

“We’ve had enough of violence by neo-fascist groups. We will bring an urgent motion before parliament tomorrow calling on the government to dissolve Forza Nuova,” leading Democratic Party (PD) lawmaker Emanuele Fiano said.

A number of other MPs and members of Prime Minister Mario Draghi’s government back the move.

Speaking outside the union body’s wrecked headquarters, CGIL chief Maurizio Landini called for Forza Nuova to be banned and announced an anti-fascist demonstration for Saturday October 16.

“They can’t intimidate us, they don’t scare us,” he told a crowd gathered to support CGIL after the violence.

Draghi’s office denounced Saturday’s violence in a statement. “The right to express one’s ideas can never degenerate into acts of aggression and intimidation,” it said.

“The Government stands by its commitment to complete the Covid-19 vaccination campaign and thanks the millions of Italians who have already taken part with conviction and a sense of civic duty.”