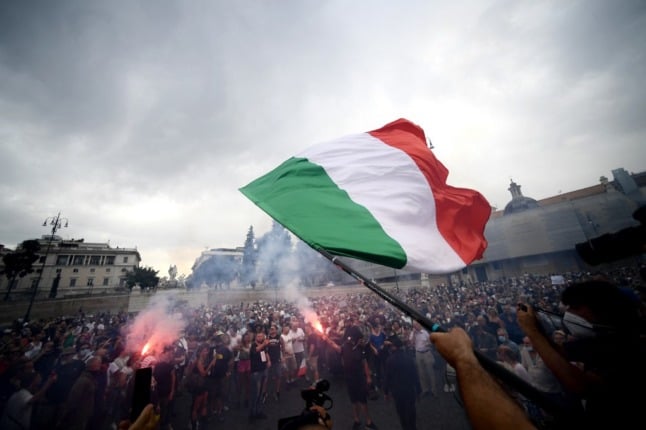 Protests have been a regular occurrence in Rome since the Italian green pass health certificate was launched. Photo. Photo: Filiippo Monteforte/AFP

Some ten thousand people protested in Rome on Saturday against of the incoming expansion of the Italian Covid-19 health certificate scheme, or green pass, from October 15th.

Another group, reportedly led by members of the far-right organisation Forza Nuova, attacked and occupied the headquarters of CGIL, the Italian General Confederation of Labour on Saturday evening.

“Our national headquarters was attacked by Forza Nuova and the no-vax movement,” stated CGIL on Twitter.

The doors to the CGIL building were left open and alarms rang out on Saturday evening, Ansa reports, as those inside used a megaphone to accuse the trade union organisation of “failing to defend workers” from the green pass obligation.

Prime Minister Mario Draghi’s office released a statement condemning “the violence that took place today in various Italian cities” and said the government “continues its commitment to complete the vaccination campaign against Covid-19”.

Around 10,000 people in total reportedly demonstrated in the Italian capital, Reuters reports, while thousands more demonstrated in Milan and other cities against the expansion of the green pass requirement to all workplaces from Friday.

The digital or paper certificate proves the bearer has received at least one dose of the vaccine, or has recently recovered from Covid-19 or tested negative.

The expansion was announced last month in an attempt to persuade the millions of eligible people still unvaccinated in Italy to get the jab.

Under the new rules, any worker who fails to present a valid health certificate will be suspended without pay, though they cannot be sacked.

School staff have been subject to the green pass requirement since September 1st, while all healthcare workers in Italy must be vaccinated under a law passed back in April.

Some 80 percent of the Italian population over the age of 12 is fully vaccinated as of Saturday, and so far protests against vaccination and the health pass in the country have been smaller than those seen this weekend.

But vaccine uptake has slowed in recent weeks as it appears the extended health certificate requirement has not had the intended effect of boosting the immunisation effort.

The sluggish rate of bookings for first jabs now stands in stark contrast to that of late July, when  online boking platforms struggled to cope as at least half a million appointments were made in the 24 hours after Prime Minister Mario Draghi first announced the domestic use of the green pass system.

With the majority of the population now inoculated against the virus, those who remain unvaccinated are likely to be the most staunch holdouts, presenting a major challenge to the government’s efforts to further increase vaccine coverage.

Draghi stated in July that vaccinations and the green pass were the only alternative to bringing back restrictions and closures should coronavirus infection rates rise again.

Health Minister Roberto Speranza said last month that the government would go ahead “without fear” with plans to mandate vaccinations if it were deemed necessary “in the defence of the right to health and the need to avoid new deprivations of freedom”.