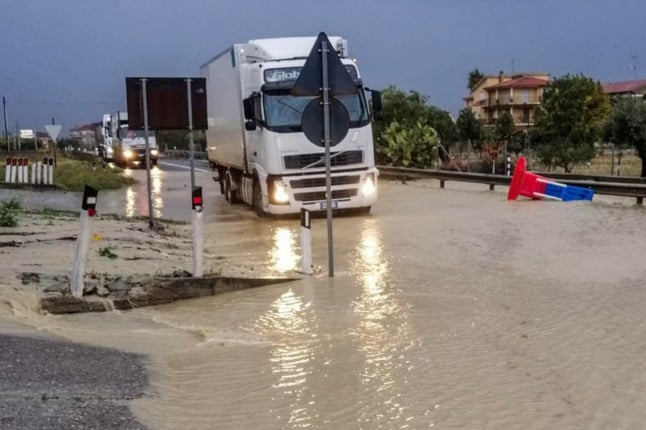 Parts of Sicily and Calabria are under red alert as Italy’s south has been hit by severe storm and floods. STRINGER / ANSA / AFP

The body of a 67-year-old man caught up in flash floods near the Sicilian town of Scordia was found by rescue workers on Sunday while his 54-year-old wife remained missing, reports the news agency Ansa.

The couple had reportedly attempted to flee the area in their car before getting swept away by the rising waters.

The website for Italy’s national fire department reported on Monday that its firefighters had carried out 580 rescues related to the floods in the space of 24 hours, conducting 400 rescue missions in Sicily and 180 in Calabria.

The Department for Civil Protection issued the warning on Sunday evening, with the east of Sicily and the south of Calabria placed under red alert.

Other parts of both regions and a part of the neighbouring region of Basilicata have been placed under orange alert (heavy rainfall, landslide and flood risk), with other areas of Basilicata and much of the southeastern region of Puglia on yellow alert (localised heavy and potentially dangerous rainfall).

A red alert envisages a likelihood of extensive flooding, falling trees, and damage to buildings, infrastructure, and crops. It triggers the automatic closure of schools and the discretionary closure of public institutions in affected areas.

Schools were closed on Monday in the Sicilian cities of Catania and Syracuse and the provinces of Messina, Agrigento, and Enna, reports the Sicilian newspaper Giornale di Sicilia; with many also closed in the Calabrian provinces of Reggio Calabria, Catanzaro and Vibo Valentia, according to the local news outlet LaCNews24.

On Monday the Il Meteo weather news site reported that the cyclone battering the south had increased in intensity and been upgraded to a Mediterranean hurricane, with the potential to reach windspeeds of up to 120 km/h.

The bad weather in the south is expected to last at least into the middle of the week, the site reports, with the centre-north of the country facing the possible threat of heavy storms over the coming weekend due to a developing weather disturbance in the Atlantic.

Earlier this month Italy saw historic levels of rainfall, with three national records broken in the space of a few hours in the northwest of the country on October 4th.