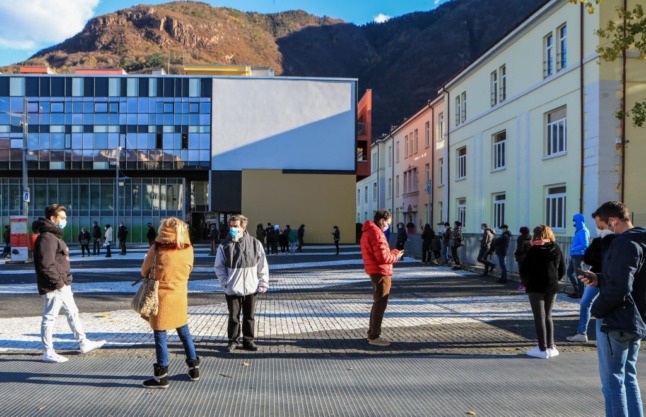 Bolzano is one of the parts of Italy expected to be placed under 'yellow' zone restrictions in coming weeks. Photo: Pierre Teyssot/AFP

So far, government ministers and leading Italian health experts have pushed back against the idea, saying Italy’s health situation is very different to Austria’s and insisting current measures are enough to keep cases “under control”.

As the regions’ proposal is placed before the government on Thursday, here’s a closer look at what it could mean for people in Italy.

Governors of several Italian regions worst hit by the recent rise in new Covid cases are appealing to the national government on Thursday to take more action to control infections – but to reserve any new restrictions for unvaccinated people.

While every region of Italy is currently classed as a low-risk ‘white’ zone under the country’s four-tiered system of restrictions, there are growing concerns that several regions look set to be placed back under ‘yellow’ zone rules by Christmas, with industry groups warning that this would be a devastating blow to the hospitality and tourism sectors.

Five regions are likely to hit the the thresholds at which they would be placed under new restrictons “within two weeks”: Veneto, Friuli Venezia-Giulia, Valle d’Aosta, Liguria and the autonomous province of Bolzano, according to the Italian Association of Epidemiology (AIE).

Yellow zone rules would mean a return to the obligation to wear masks in outdoor as well as indoor public places, the return of capacity restrictions for theatres and other venues and limits on group dining in restaurants.

Stricter orange or red zone rules could mean a return to the business closures and travel restrictions seen last winter, though for now this remains a more remote prospect.

Massimiliano Fedriga, president of Friuli Venezia Giulia, led the calls for the government to apply any such new restrictions in future only on those who haven’t had the jab under a model similar to that currently in place in Austria, as well as the Czech Republic and parts of Germany.

READ ALSO: Austria’s lockdown for the unvaccinated: How is it working?

The suggested system would limit Italy’s ‘green pass’ health certificate to those who are vaccinated or have recovered from Covid, and would mean it was no longer available to those with a negative test result.

Though few details are available about how the proposed rules would work, this appears to mean that those who had not been vaccinated or certified as recovered would no longer be able to enter venues or businesses where green passes are required in Italy, including museums, gyms, theatres, indoor bars and restaurants.

The pass is also a requirement on some forms of long-distance public transport and at ski resorts, as well as at all workplaces in Italy – though the proposal reportedly allows an exeption for people to access workplaces with a negative test result.

Fedriga reportedly told journalists: “I wasn’t talking about placing restrictions on non-vaccinated people, but if there were a change in the colour of the regions, the vaccinated should have more freedom.”

“Mine was a hypothesis to manage an unsustainable situation. Those who have been vaccinated, who believe in science, cannot pay the price of the closures.”

When and where could this happen in Italy?

The proposal is to be placed before the government on Thursday at a conference of regional leaders, national broadcaster Rai reports.

So far however, government ministers have repeatedly stressed that the idea isn’t being considered at the moment, saying the health situation in Italy is under control and pointing out that numbers in the country are far lower than in neighbouring Austria.

Austria, which has just under 10 million inhabitants, has been reporting around 12,000 cases a day while Italy, with a population of 60 million, on Wednesday recorded 10,000 cases – the highest figure seen since May.

Italy meanwhile also has a higher rate of vaccination than either Austria or Germany, data analysis shows.

Any move to yellow, orange or red zones would be based more on hospitalisation and intensive care occupancy rates in a region than on the number of infections, under a change to the system requested by regional governors hoping to avoid further restrictions earlier in 2021.

However, government ministers pointed out that pressure on hospitals and intensive care units “is a bit higher in Veneto Friuli and Bolzano but it is not shooting upwards”.

“Lockdown for the unvaccinated is not a strategy to be implemented with today’s numbers,” Health Undersecretary Pierpaolo Sileri told Italy’s Radio Cusano Campus on Wednesday.

“It could be considered if regions are placed into the orange zone.”

He said the proposal “must be kept on the table, like many other options, but the situation is under control.”

Several of Italy’s most prominent health experts have spoken out against the idea of implementing an “Austrian-style” system with differing rules for those who are not vaccinated.

Walter Ricciardi, an advisor to the health minister, said last week that Italy “doesn’t need” to follow Austria’s lead by implementing a lockdown for the unvaccinated “because the measures taken serve to keep the epidemic under control, as is happening.”

Instead, he said the government needed to enforce a vaccine obligation “at least for all workers in contact with the public”.

On Monday, Health Undersecretary Andrea Costa reiterated that the ministry was still looking at making Covid vaccines obligatory for more groups, under plans the government has been considering since late summer.

For now, Italian health authorities are relying on the green pass system and the country’s relatively high rate of vaccination coverage to keep the infection rate under control.

New measures currently being planned by the health ministry include the rollout of mandatory third doses for health workers, as well as a cut to the validity of green passes for the vaccinated from 12 to nine months.