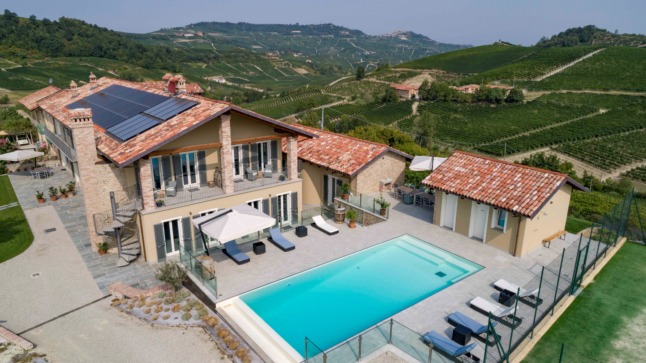 Living among Italian vineyards and rolling hills in an area worthy of world heritage status may sound like the stuff of movies, but Petteri, along with his wife and children, turned this dreamlike aspiration into a reality after they embarked on their Italian home project.

They first toyed with the idea of living in Italy back in 2011, when they tried out the lifestyle in the Lake Como area.

After a successful 18 months, Petteri and his family decided Italy was the place for them to put down roots. So, they began their property search in the north of the country, covering a wide area including the regions of Valle d’Aosta, Lombardy and Veneto.

In December 2012, they found their ideal home and location in Barolo, in the northern region of Piedmont. 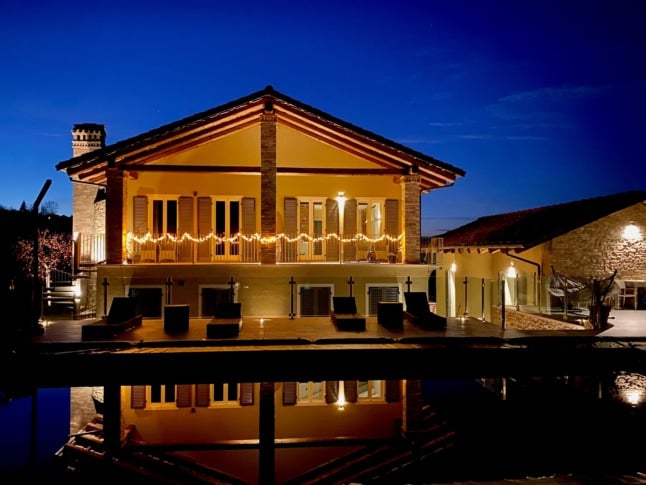 “It is beautiful countryside in this area, very ‘tranquillo’, and it is the authentic Italy in the middle of nowhere,” Petteri told The Local.

“At the same time, we discovered that quite a lot of international people visit Barolo from early April until almost Christmas time. It means there are nice restaurants, good quality food, nice and warm, welcoming people and yet, affordable pricing in the area too,” he added.

An affordable area is attractive when property hunting in Italy, naturally, as it opens up more possibilities when searching for a home.

READ ALSO: My Italian Home: ‘We bought the cheapest house in Piedmont and live mortgage free’

An engineer by trade, Petteri had much bigger ambitions, however, with a substantial €1.3 million renovation budget that ended up going over by 20 percent in the end.

The project took three years, an extra year than planned, while the added time and costs came down to “their decisions”, he said, adding that “there were no big surprises”. It was, in part, due to “bad planning” and revising plans as they went along, according to Petteri. 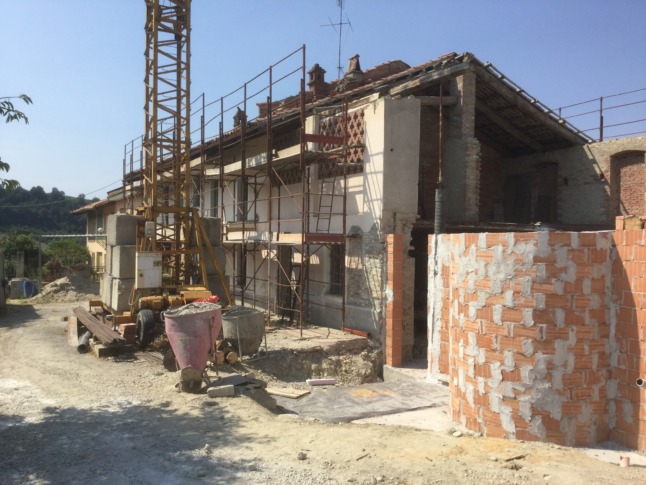 However, they don’t have many regrets where the timescale and budget is concerned and are more than satisfied with the end result: their own home plus five apartments that they now rent out as holiday lets.

Named after the local flower and dialect, Casa Visette is now both the family’s home and livelihood.

Petteri said they were looking for “a place that has harmony”, close to civilisation, but still had its own sense of peace.

Not only did the property they found offer that, it came with “a million stories to tell”, as it was an old winery, which nobody really knows the age of.

It is composed of natural stone inside and rough estimates place it to around 200-300 years old, while its life as a wine producer stopped in the 1980s, Petteri told us.

The building had been owned by the same family for a hundred years and, full of stories and unknown exact origins, the property’s potential charmed the Finnish national.

The expansive 650-square-metre property was a project to sink your teeth into, made even more challenging by the fact that the area was undergoing Unesco approval at the time of renovations.

Luckily for Petteri, he managed to get consent for certain planning permissions in time, which would have been much trickier to achieve once the area did become Unesco listed in 2014. 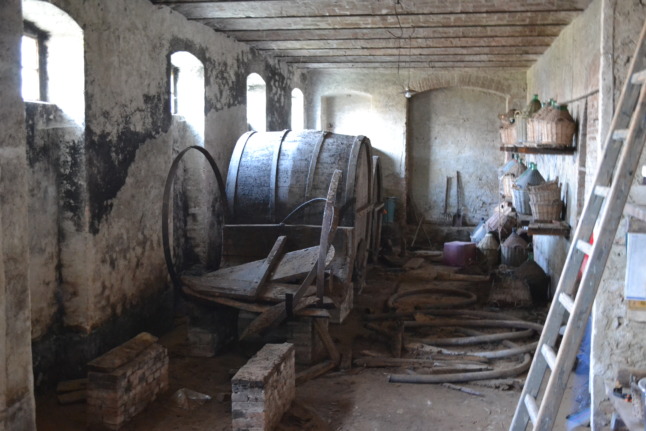 The old winery, the ‘heart of the home’, before construction began. Photo: Petteri Laine.

This includes installing features such as the tennis court and the swimming pool, which were given the go-ahead prior to the Unesco accreditation.

Even so, they weren’t allowed do whatever they liked with the property. In fact, the house had to remain the same shape and had to be in keeping with the rustic appearance of the local area.

However, their Nordic renovation plans were more related to energy efficiency and sustainability than detracting from the style of local houses.

“There was some freedom with the restorations, though. The council and planning committee told me I could paint the house any colour I liked – as long as it was the colour of the local soil,” Petteri told us with a laugh. 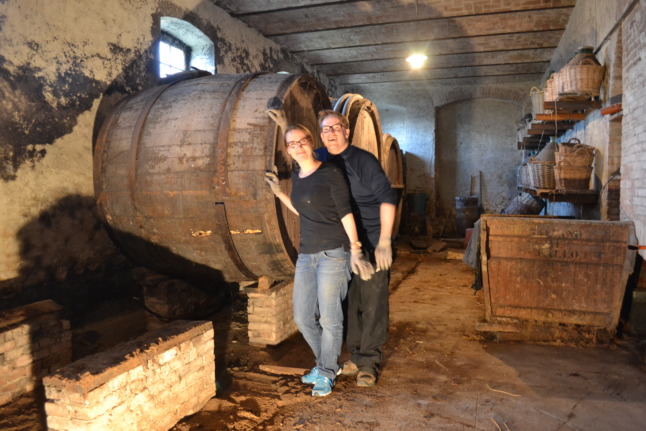 So how did they combine their Scandinavian building ambitions while keeping faithful to the area’s characteristics?

“We have geothermal heating, solar panels for heating the water and insulation for the whole house. It has been built with sustainable ‘Scandinavian standards’ in terms of floor heating, triple-glazed windows and a centralised heating system with a geothermal pump, for example,” Petteri said.

READ ALSO: What you need to know about installing solar panels on your home in Italy

This has kept bills down to around €1,000 per month in the winter, which although sounds a lot, he considers it good value for a property of that size.

The appearance of the house, on the other hand, is sympathetic to the local area.

“We didn’t use big stones as we originally wanted, as that’s not traditional in this area. We kept the wine cellar, the heart of the house, but the rest had to be redone due to its uninhabitable state,” he added.

Their approach was certainly in line with the other buildings in this particular part of Piedmont’s wine country. They reclaimed many parts of the old building and installed them in the one they live in today.

The stairs, for example, have been created from the old wooden beams and many features of the renovated property have been recycled from the original building. 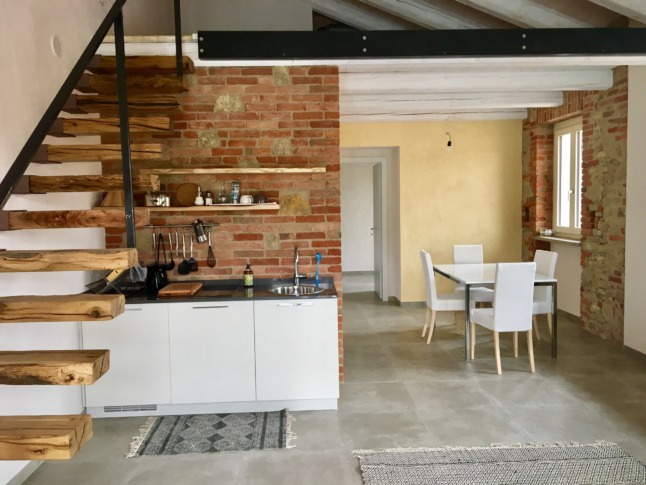 Wooden beams from the original property now have a second life as stairs. Photo: Petteri Laine.

And while their budget might fool you into thinking anything is possible with such a large expenditure, no amount of money can shield you from Italian customs and protocol.

“Yes, you can search for alternatives from elsewhere, but if possible try to hire services from local people. It might not always be easy if you have new ideas they aren’t familiar with, but you can communicate them in a constructive way.

“Use pictures, ideas and drawings. It is important that they feel part of your project, not only the workers on the job,” he added. 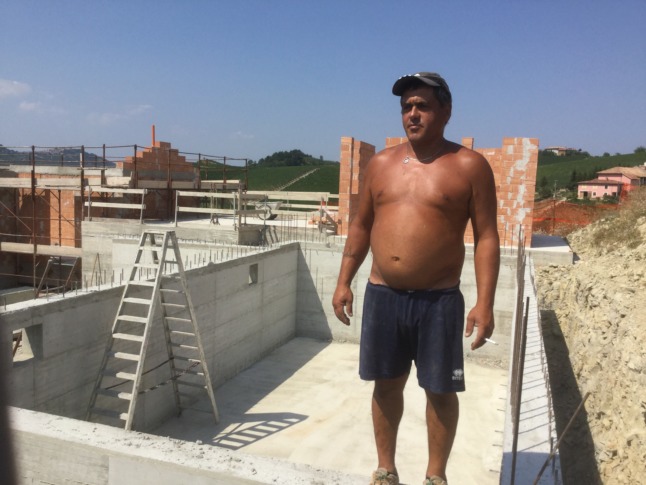 Working with locals is key to renovation success in Italy, according to Petteri. Photo: Petteri Laine.

When it comes to the language, he said that it’s best to get help with Italian when you’re going through the buying and renovating process if you’re not already fluent. Although he now speaks Italian and feels part of the local community, he admitted he wasn’t sure what they were buying at first, so he called on an Italian-speaking friend to mediate.

As well as being mindful of Italian sensibilities and simply the way that things are done, he also recommended being there in person as much as possible to follow the progress, push it along and ask questions.

“Hidden extra works that you sometimes don’t see become really important. It’s all in the details,” he warned.

Their project was significant, in terms of both time and budget, but Petteri and his family seem to have taken it all with a good attitude and a sense of humour.

READ ALSO: Property: Why we decided to build our new house in Italy out of wood 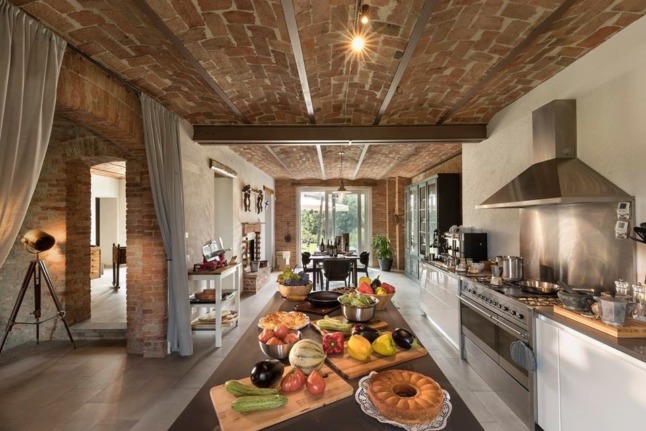 Since they permanently moved in at the end of 2018, their four children had grown in the intervening years and now just their youngest lives with them, while their eldest three study abroad.

After living in various countries in Europe, including Germany and Belgium, Italy is where they have planted themselves at last.

Their idyllic surroundings aren’t the only reason they’ve picked this corner of the world, but also the Italian culture overall has given them a sense of peace and contentment.

“We love the standard of living here. Everybody has a right to enjoy life whatever their education – everyone talks about wine and food, from the truck driver to the company owner. Cuisine and drink brings everyone together; it is a right for everyone,” he said.

“We chat with the locals in the village and get invited out. We’ll always be stranieri, but I do feel integrated here, which is so important for understanding what’s going on in the area and Italy beyond.

“We have a feeling that we are part of the community. It is peaceful, really peaceful.”

Do you have a renovation story to share? We’d love to hear from you – email us here.