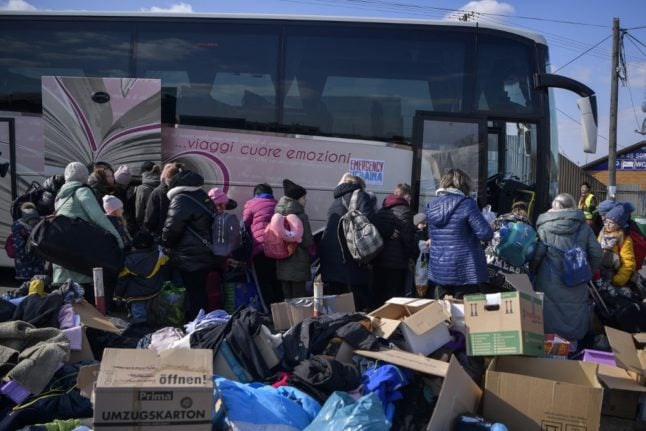 People queue to take a direct bus to Italy after crossing the Ukrainian border into Poland in Medyka, southeastern Poland. (Photo by Louisa GOULIAMAKI / AFP)

Following Russia’s invasion of Ukraine, a total of 91,137 people have arrived in Italy so far seeking refuge according to the latest data from Italy’s interior ministry.

The majority of those are women and children, with men making up just over 10,000 of the total figure.

But with many arriving in just four regions – Emilia-Romagna, Lombardy, Lazio and Campania – local authorities now say they are struggling.

Authorities noted that just four destination cities are declared by the majority of arrivals from Ukraine upon entry into Italy: Milan, Rome, Naples and Bologna.

The Lombardy region alone has taken in 40 percent of all Ukrainian refugees in Italy, according to Italian newspaper Corriere della Sera.

Most of these are reportedly staying with friends or relatives, with just a small proportion accommodated in state-run reception centres.

Under the Ukraine decree approved at the end of March, the government increased the number of places available in its refugee reception centres (Cas) and approved a package of financial support for those who have found independent accommodation, though local authorities in the areas receiving most arrivals say this is not enough.

The head of Italy’s Civil Protection, Fabrizio Curcio, has spoken of redistributing those who have fled from Ukraine to help “regions under pressure”, should the numbers continue to rise, reports news agency Ansa.

“Obviously, if we can no longer manage these numbers, we will propose transfers,” he said.

Irene Priolo, environmental councillor for the region of Emilia Romagna, was among those sounding the alarm over the rising numbers of Ukraine refugees arriving in certain areas.

“There is great concern about the reception of such a large number of refugees,” she told local newspaper Bologna Today.

The councillor also advocated speeding up the payments that Ukraine refugees are entitled to – and to extending them.

Italy’s government approved a monthly payment of €300 for three months to Ukrainian arrivals who have found independent accommodation, with friends or family for example.

Ukrainians seeking refuge in Italy are also eligible for a special residence permit valid for 12 months.

The special permit doesn’t require holders to apply for a visa and allows them to work, access education and healthcare and claim social security benefits once they arrive in Italy.