Rome's Pantheon is currently free to visit. A proposed ticket price of just two euros has caused a politial row - and Romans in particular are against it.  (Photo by Tiziana FABI / AFP)

The proposal of charging an entry fee at the Pantheon, launched by Culture Minister Gennaro Sangiuliano, turned out to be provocative and very controversial and has once again triggered political mayhem.

Every two or three years a politician comes up with this idea, which is soon deemed preposterous and shelved.

Even if the proposed fee would be just two euros, less than a slice of pizza or a cappuccino, and a ridiculously low sum any foreign visitor would be glad to pay, Romans in particular are against it.

This is down to the general belief among Italians that their artistic and historic monuments and sites are a ‘common good’: part of their national heritage, particularly the most popular and iconic sites.

As such, entry should be free. Citizens have the right to fully enjoy taking in the views of a church or a sanctuary without having to pay even 50 cents.

Italy has an enormous treasure trove of artistic jewels, but despite the high value of its unique sites and monuments Italian culture is ‘cheap’, for free access or a low ticket downgrades the artistic offer in my view.

I believe Italian churches should also charge tourists a fee for entry, as it would help support maintenance costs – and this includes popular (yet free) sites such as the Pantheon, which is one of the most visited in Italy.

The trouble with the Pantheon lies in its dual nature which makes any entry fee a particularly thorny issue. The Pantheon is a basilica-mausoleum built on a former Ancient Roman temple, where mass and religious celebrations are regularly held on specific calendar dates.

There are tombs of Renaissance artists and Italian, alongside pagan relics. As with all churches in Italy, it is kept open and free for believers who wish to come and pray.

However, the Pantheon is mainly a tourist hotspot rather than a mystical pilgrimage site, and is always packed like a McDonald’s, with visitors sitting outside eating paninis and gelato and feeding crumbs to the pigeons.

Adding an entry fee would limit the crowds and keep the entire Piazza della Rotonda in order. I would actually raise the ticket to at least five euros. 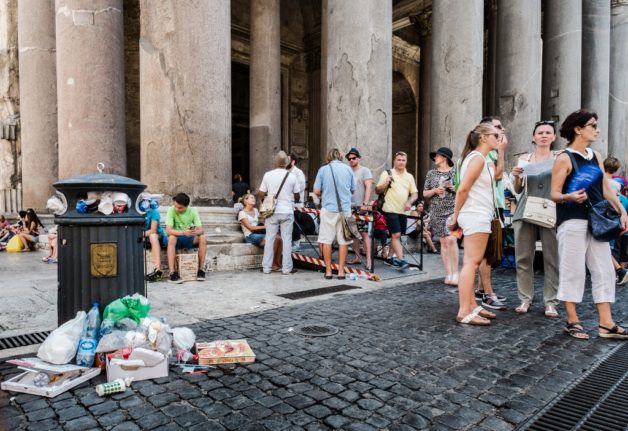 Those in favour of charging fo entry to the pantheon say the revenue could be used to keep the surrounding area in order. Litter and overflowing rubbish bins are a regular issue in summer. (Photo by Andreas SOLARO / AFP)

To many Romans the Pantheon is the symbol of their identity, a bit like the cradle of their own ancestry, so now the city council is pushing to exempt people living in the Eternal City to pay the entrance fee if it is ever applied, which in my view would create a form of discrimination.

If an attraction is free for everyone, then it follows that everyone should pay if there is an entry ticket.

I remember once meeting an American lady in front of the Pantheon who, before going inside, pulled out her wallet and asked me “how much is the ticket?” Her question took me by surprise because I’d never given much thought to the fact that it was a normal thing for Italians not to pay to admire the Pantheon. After all, I thought, it’s ours.

When I told her there was no need for money she was surprised and replied “you have such beautiful sites that are unique in the world and must have a cost”.

I think the whole political and social controversy stemming from turning the Pantheon into a payable attraction is due to a perverse sort of ‘artistic inflation’.

Just because we have so many (probably too many) artistic and historical monuments in Italy, we tend to consider these our own property and to take it for granted that they belong to all Italians as precious jewels of our common heritage.

Therefore, access must be public and open, with no restrictions whatsoever.

In Italy there is a widespread ideal of ‘bene pubblico artistico-culturale’ (artistic and historic public good) which is sacrosanct. According to this ‘dogma’, said public good – be it a church, temple, or ruins – must be ‘fruibile a tutti’ (available and accessible to everyone).

If on one hand this is a very democratic approach, on the other it drains precious resources for the upkeep of a vast artistic heritage which cannot be managed with public money alone.

I think the controversy surrounding the potential two-euro entry ticket to the Pantheon is absurd, but predictable, and by now embedded in the Italian mindset.

It would be a good way to raise revenues to contribute to the maintenance of the site, but Italy lacks an entrepreneurial approach when it comes to exploiting and cashing in on its huge artistic inheritance.