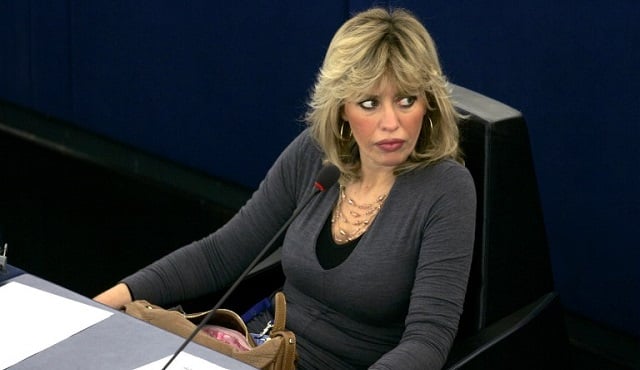 The pine forest on Monte Giano, close to Rieti, spelled out 'DVX', the Latin for 'leader' or Italian 'Duce', as the Fascist dictator was known.

A man has been reported to police for allegedly starting the fire while cooking tomatoes, the Italian fire brigade said last week. However, forestry police on Wednesday found paper balls and inflammable liquid on the mountain believed to have been used to spread the fire deliberately, according to Rome-based daily Il Messaggero.

The forest, made up of 20,000 trees, was first planted by forestry students in honour of Mussolini in 1939. It was declared a national monument and underwent a restoration project in 2004.

In clear weather, the letters – which are 630 feet tall and 1,360 feet across – could even be seen from Rome, some 50 miles away, but due to fire damage, only the 'D' has been left intact.

On Thursday, Alessandra Mussolini – the granddaughter of Benito and an MEP with Silvio Berlusconi's Forza Italia party – said she would visit the forest.

She said that she would talk to local authorities about the possibility of repairing the homage.

The far-right group CasaPound has already launched a fundraising effort to restore the forest as well as a call to farmers to help with the restoration, under the slogan 'You can't erase history'. The Local contacted Anpi, Italy's national partisans' association, for comment but had not received a response at the time of publication. The 'DVX' forest, where flames were still burning this week, has not been the only victim of the summer's wildfires which have destroyed vast areas of vegetation across the country. Many are believed to have been started by arsonists, while the high July temperatures following months of below-average rainfall allowed them to take hold.

In July, tourists and locals were evacuated in Tuscany, Campania, Calabria and Sicily, when more than 26,000 hectares of bush land were destroyed, including a large area of nature reserves around Mount Vesuvius.