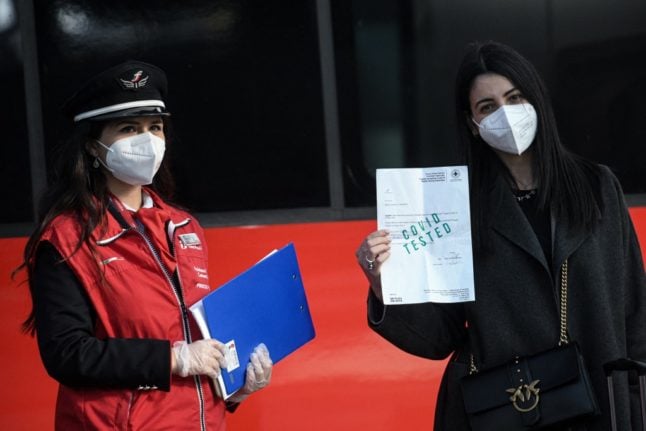 **NOTE: This article is no longer being updated. Please find the latest news about Italy’s green certificate here.**

Following a string of announcements and updates about the ‘green pass’ from the Italian government in recent weeks, here’s an updated summary of what we know about the scheme.

Who needs a ‘green pass’?

Italy’s certificazione verde or ‘green pass’ was first introduced to allow domestic travel between regions, and people who live in Italy can also use the pass to travel overseas and return to Italy without quarantining.

The Italian government has said the pass will soon be extended to foreign visitors to Italy, and that it will also be required for anyone attending wedding receptions, concerts and other large events in the country once they are permitted again from mid-June.

Children under the age of two are exempt from the requirement.

For the moment, people coming to Italy from outside the European Union will still need to follow quarantine and testing rules, which vary depending on the country you are travelling from.

Travellers to Italy from EU and Schengen zone countries, the UK or Israel may enter the country if they can show proof of a negative PCR test result from within the previous 48 hours. The previous quarantine requirement from these countries has now been scrapped.

What exactly is the ‘green pass’?

This is the name being used in Italy at the moment for any document which certifies that the holder has either been vaccinated, has tested negative for coronavirus within the past 48 hours, or has recently contracted and recovered from Covid-19.

While a digital version of the certificate is expected to be available by summer, passes issued in Italy are currently in the form of a paper certificate – or three different certificates, to be precise.

These are in fact the same documents already being issued to those who have tested negative, recovered, or vaccinated.

While paper certificates can easily be forged, the penalties if you’re caught doing so are severe.

The Italian government’s latest emergency decree states that the possible prison term for anyone using counterfeit or altered official documents will be increased by a third.

Anyone found making false statements to obtain the pass could be fined up to 3,000 euros.

In Italy, the paper certificates are issued by the vaccination centre, or in the case of recovery, by a hospital, family doctor or pediatrician.

For those who are vaccinated, the certificate will be issued from the first jab, Italy’s government has confirmed.

It had previously said that certificates issued after recovery or vaccination would remain valid for six months, though in the case of vaccination this has now been extended to nine.

Certificates obtained by testing negative, meanwhile, are to be valid for 48 hours and can be issued by testing centres or pharmacies in Italy.

The results of rapid antigen tests available for free at train stations in some Italian cities can also be used as certification.

Italy has confirmed that for now it will recognise equivalent documents issued in EU countries, and those certifying certain vaccinations in non-EU countries.

The vaccines approved by the EU regulator are currently Pfizer, Moderna, AstraZeneca and Johnson & Johnson, though four others are under review.

Is this the same thing as the European green pass?

Italy has chosen to start using paper certificates while it waits for an EU-wide travel pass scheme to launch.

The document is expected to go digital once Italy adopts the EU version in mid-June.

READ ALSO: How will the EU’s ‘Covid passport’ system work for tourists in Europe?

The European green pass is expected to be accessible using a smartphone app with a QR code.

Travellers will need to show the code along with a passport or ID card when entering any EU country.

However, even after this is introduced, rules may still vary around Europe as countries may keep additional measures in place, such as a testing requirement or quarantine period.

The Italian government has not yet given any further details of the requirements for arrivals from non-EU countries to be able to use the green pass scheme.

For more information on the current restrictions and health situation in Italy please see the Health Ministry’s website (in English).