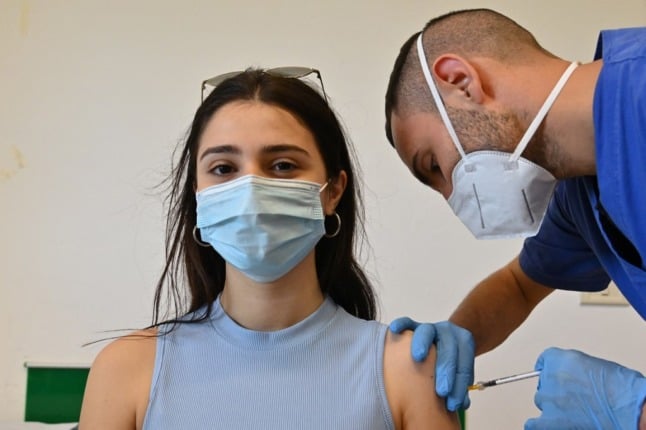 Italy says just one dose of a Covid-19 vaccine will allow you to travel without quarantining. Photo: Alberto Pizzoli/AFP

The certificazione verde (“green pass”) that allows travellers to enter Italy without quarantining will be issued from the first jab, the final text of Italy’s latest Covid-19 decree states.

According to the decree, signed by President Sergio Mattarella on Tuesday night and effective immediately, the green pass will be valid from 15 days after you receive the first injection and until you get the second – so around five to six weeks later for the Pfizer or Moderna vaccines, and 10 to 12 weeks for AstraZeneca.

At that point you will be able to claim the final version, which will remain valid for nine months after you’ve been fully vaccinated – less than the 12 months originally proposed by some government sources, but more than the six months currently allowed.

People who receive the single-dose Johnson & Johnson vaccine will be eligible for the nine-month pass as soon as they’ve had their jab.

The provisions apply to people who live in Italy and get vaccinated here, who can use the green pass to travel overseas and return to Italy without quarantining.

Residents will also be able to use it to attend wedding receptions and other large events once they are permitted again from mid-June, the government has said.

EXPLAINED: How and when weddings in Italy can go ahead this summer

Italy has also promised to recognise vaccinations performed in other countries with any of the vaccines approved by the EU regulator (currently Pfizer, Moderna, AstraZeneca and Johnson & Johnson, though four others are under review).

In theory it could offer the green pass to visitors on the same terms – after one jab instead of two – though this has not been confirmed.

The rules may also depend on what the EU decides about its international Covid passport, the bloc-wide equivalent that is due to debut in June. The EU Commission has proposed making the pass available to visitors who have had both recommended doses of a vaccine, not just the first.

Italy currently accepts any certificate, paper or digital, that shows the bearer has either been fully vaccinated against Covid-19, has had Covid-19 and fully recovered, or tested negative for coronavirus in the past 48 hours.

It had previously said that certificates issued after recovery or vaccination would remain valid for six months, though in the case of vaccination this has now been extended to nine.