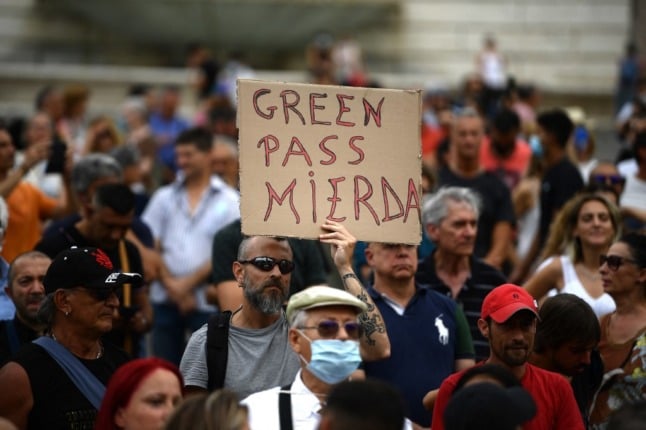 After Italian Prime Minister Mario Draghi on Thursday announced an expansion of the country’s health passport scheme and urged people to get vaccinated or face a new lockdown, protests were organised in dozens of towns and cities across the country.

“Better to die free than live like slaves!” read one placard held up outside Milan’s cathedral, while another in Rome’s historic centre read “Vaccines set you free” over a picture of the gates to Auschwitz.

The vast majority of protesters were not wearing masks, AFP reports. Meanwhile, online vaccination booking portals were reportedly struggling to cope with demand for appointments on Friday and Saturday due to what Italian media is calling the “Draghi effect”.

at least half a million vaccination appointments were made in the 24 hours following Draghi’s televised address, according to Italy’s coronavirus emergency commissioner.

“Today we registered an increase in bookings ranging from +15% to +200% depending on the region. In Friuli Venezia Giulia we registered +6,000%”. Emergency Commissioner Francesco Figliuolo told Italian news show Tg5 on Friday evening.

More than 100,000 appointments were booked in the regions of Lazio and Lombardy alone, Figliuolo said. From August 6th, people in Italy will need the pass to enter gyms, swimming pools, museums, cinemas, theatres, sports stadiums and other public venues, including indoor seating areas at bars and restaurants.

It will serve as proof that bearers have either been vaccinated, undergone a recent negative Covid-19 test, or recovered from Covid-19.

Business owners are expected to enforce the rules or face fines of up to 1,000 euros under the decree adopted by the cabinet this week.

The government hopes the expansion of the ‘green pass’ scheme will persuade more people to book their vaccinations as health ministry data showed a recent slowdown in the number of first jabs administered.

Draghi said the scheme was also being expanded as an alternative to new restrictions and business closures as the number of new cases recorded in the country has spiked.

”The use of vaccine certificates is needed to keep the economy open,” Draghi said,

He said the alternative to the green pass and more vaccination would be the return of health restrictions, stating: “No vaccines mean a new lockdown”.

Draghi also had strong words for anyone encouraging others to avoid getting vaccinated, saying: “An invitation not to get vaccinated is an invitation to die, or to let others die.” Protesters walk past a restaurant in Milan. Photo: Miguel Medina/AFP

Piedmont regional governor Alberto Cirio said the government’s anouncement “had the effect of doubling the requests for vaccinations.”

“Every hour on our portal we’re registering double the number compared to the average of the previous days,” he told news agency Ansa.

Vice-President of the Lombardy Region Letizia Moratti wrote on Twitter on Friday that “participation in the vaccination campaign is growing, yesterday about 49,000 citizens signed up. To meet these new requests, an additional 100,000 new appointments will be made available for first doses from today until the end of August ”

Matteo Salvini, leader of the right-wing populist League party, got vaccinated on Friday according to Italian media reports.