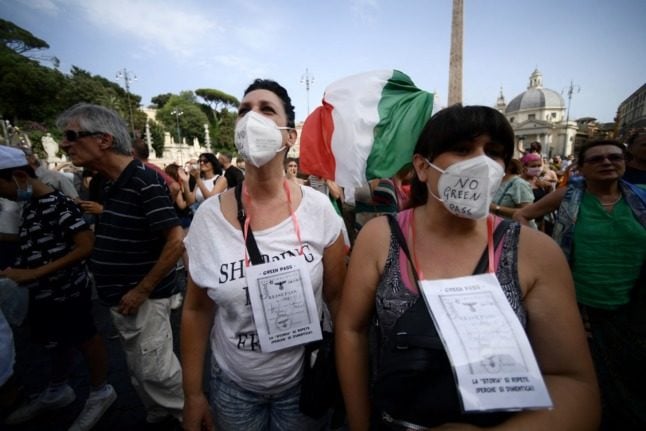 Protesters hold an Italian flag as they take part in a demonstration against the green pass in Piazza del Popolo in Rome on July 24, 2021. Filippo MONTEFORTE / AFP

The report, conducted by the EngageMinds Hub research centre at the Catholic University of the Sacred Heart, sampled the views of 6,000 people from across the country.

It concludes Italians are deeply divided on the issue, with just 56% of those surveyed saying they believe the Covid-19 health certificate is an effective tool in reducing the risk of infections.

The green pass proves bearers have either been vaccinated with at least one dose, have recovered from Covid-19 within the past six months, or have tested negative in the previous 48 hours (for rapid antigen tests) or 72 hours (for molecular PCR tests).

The over-60s are the demographic most in favour of the green pass, while only half of those under the age of 34 approve of its use, the report says.

READ ALSO: EXPLAINED: How Italy will enforce the new ‘green pass’ rules in all workplaces

“Our latest survey shows that the green pass, approved by just over 50% of Italians, does not reach the basis for full social consensus,” said centre director Guendalina Graffigna, a professor of health and consumer psychology.

“From the data emerge large pockets of the population that remain uncertain about the usefulness of the green certificate and the requirement for its use.” Protesters take part in a demonstration against the green pass at Piazza Duomo in Milan on July 24, 2021. The placard reads “Green Pass No, Freedom Yes”. MIGUEL MEDINA / AFP

“People who show signs of fatigue, frustration and distrust of the system, an attitude that in the long term can become problematic”.

The requirement to show a green pass has already been in place since September 1st for schoolteachers and university and care home staff, and for anyone wanting to use long-distance interregional public transport.

The health certificate has been obligatory since August 6th for anyone wanting to enter most cultural, entertainment and leisure venues in the country, and to dine indoors at restaurants.

Workers can opt to get tested instead of receiving the vaccine, but from Friday those who wish to remain unvaccinated must pay for a test every two to three days.

Rapid antigen tests are capped at €15 in certain pharmacies participating in a government scheme to keep prices down for workers, though may cost more at non-participating pharmacies.

Those who fail to produce a green pass cannot be fired, but they could be fined or suspended without pay.

Employees who fail to produce a pass face penalties of between €600 and €1,500, and salaries will be frozen from the first day they show up to work without the certificate. Employers are subject to fines of between €400 and €1,000 for failing to uphold the rules.

A 10,000 person-strong protest against the new rules held in Rome’s Piazza del Popolo on Saturday descended into violence as leaders of the neo-fascist Forza Nuova party occupied the offices of the CGIL trade union and attempted to launch an attack on Palazzo Chigi, the official residence of the Italian prime minister. A protest against the green pass in central Rome on October 9, 2021 descended into violence and clashes with police. Tiziana FABI / AFP

Clashes with police left 38 officers injured and buildings ransacked. Twelve Forza Nuova leaders were arrested, and multiple Italian politicians and public figures have called for the party to be disbanded.

Despite having been offered the possibility of free Covid tests, dock workers in Trieste are now threatening to go on strike against the rules by blocking all activities in their port, a major hub in the northeast, from October 15th.

Meanwhile, there are concerns violence could break out again next Saturday, when the anti-pass movement is planning further protests and unions are preparing for a big anti-fascist rally in Rome.