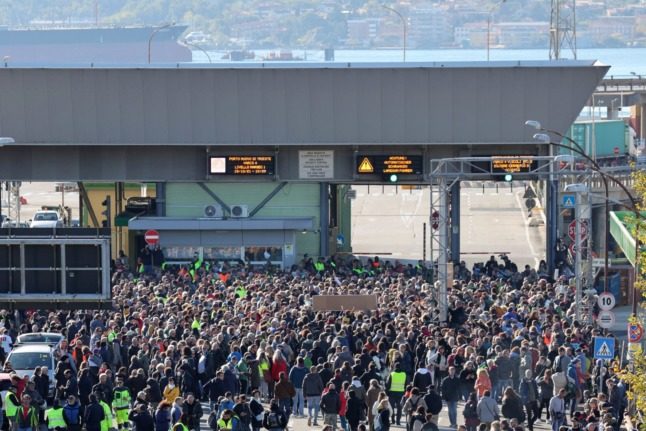 Dockers and port workers gather at the Port of Trieste’s Gate 4 on October 15, 2021 to protest new coronavirus restrictions for workers. STRINGER / ANSA / AFP

A new law that came into effect on October 15th requires all workers across Italy to show a Covid-19 health certificate or ‘green pass’ to access any workplace.

The green pass shows the holder is vaccinated against, recovered from, or has recently tested negative for the coronavirus. While workers can opt to get tested instead of receiving the vaccine, those who wish to remain unvaccinated must now pay for a test every two to three days.

Italy’s government hopes the measures, which are the strictest anti-Covid restrictions yet enacted by a Western democracy, will boost vaccination coverage and keep infection rates down. Dockers and port workers demonstrate outside the Port of Trieste’s Gate 4 on October 15, 2021 to protest new coronavirus restrictions for workers. STRINGER / ANSA / AFP

Protests against the rules were held across the country on Friday, with most of them remaining small and undisruptive.

In northwestern Genoa, dock workers temporarily blockaded the port’s international San Benigno gate and ferry terminal, and demonstrators elsewhere in the city blocked the access ramp to the ‘Sopraelevata’ expressway.

READ ALSO: Covid green pass: How are people in Italy reacting to the new law for workplaces?

And in Bologna an estimated 2,000 protesters displaying the Italian national flag and holding placards saying “we are free” and “the green pass discriminates” marched from Piazza Maggiore to the headquarters of the Emilia-Romagna regional authorities in Viale Aldo Moro. People gather during a protest against the green pass in Milan on October 16, 2021. Piero CRUCIATTI / AFP

But by far the largest crowd was seen at the port of Trieste, where an estimated 6,500 demonstrators gathered at the protest’s peak on Friday, and where crowds returned over the following days to continue blocking access to one of the port’s entrances.

The dock workers had called the strike despite having been offered free Covid tests, and their protest attracted demonstrators from out of town.

On Monday morning, dozens of police in riot gear faced off against hundreds of remaining demonstrators and port workers.

“Liberty, liberty!” shouted protesters, as others yelled, “We’re not violent, put down your shields”.

Police managed to clear the entrance after a few hours of standoff, pushing demonstrators to a nearby parking lot.

Although more than 85 percent of Italians over the age of 12 have received at least one vaccine jab, qualifying them for the pass, there remain up to three million workers estimated to be unvaccinated.

A protest in Rome on October 9th attracted 10,000 people and descended into violence after members of a neo-fascist group ransacked buildings and clashed with the police, leaving 38 officers injured.

A counter-demonstration held in the capital on Saturday calling on authorities to ban fascist-inspired groups drew an estimated 200,000 people.