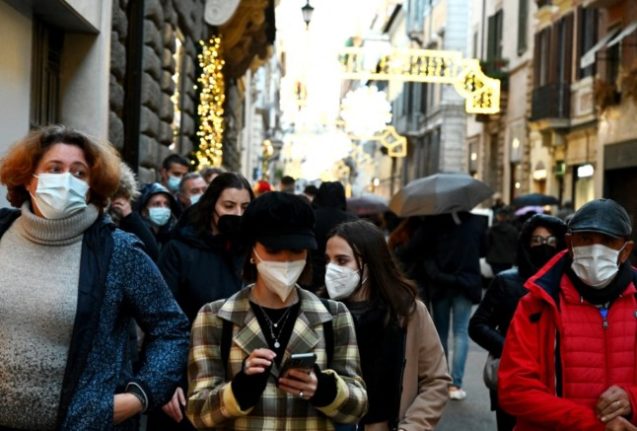 Masks will be obligatory in all of Italy's outdoor spaces. Photo by Vincenzo PINTO / AFP

The minister, who announced the measure to the cabinet, did not say when the rule would come into effect but stated that higher quality masks would be required in certain venues including cinemas, theatres, sporting events and on public transport.

“It’s a difficult phase” in the face of raging infections that the country is confronting because of the Omicron variant of coronavirus, Speranza said.

New measures “should create stronger protections for our population and our health system,” he added.

EXPLAINED: What will change under Italy’s new Covid decree?

Italy has been one of the most pro-mask countries in Europe since the start of the pandemic and wearing a face mask in busy public areas has been mandatory since May 2020, with the rules tightened even further in October 2020, then subsequently dropped only this summer.

According to the latest rules, it will be compulsory to wear FFP2 masks in cinemas, theatres, live music or entertainment venues, discos, open-air stadiums and sports halls.

In addition, it’s forbidden to consume food and drink in all these places, if indoors. So that means no soft drinks or popcorn for those going to watch a film at the cinema.

These higher grade masks will also have to be worn on board transport: on planes, trains, ferries, buses, trams, coaches and the metro.

The decision to reintroduce compulsory outdoor mask wearing everywhere, even in the lowest risk ‘white’ zones, came among a raft of new public health measures intended to stem the latest Covid wave fuelled by the Omicron variant.

Italy saw a record 44,595 coronavirus infections in 24 hours on Thursday, the highest daily number of infections seen in the country since the start of the pandemic.

Authorities have made plans for new restrictions on public gatherings: New Year’s celebrations are effectively forbidden in Italy as all mass gatherings, parties and events are banned until the end of January – even outdoors.

Many local authorities already chose to cancel Christmas and New Year’s Eve events in towns and cities across the country prior to the announcement.

The government also decided to reduce the validity of health certificates issued to those who have received vaccinations from nine months to six, starting from February 1st.

Meanwhile, the reinforced or ‘super’ green pass proving vaccination or recovery will become a requirement in more venues, including museums.

People will be able to access booster jabs four months after their most recent dose, down from six months, with the new rule to be introduced at an unspecified future point.

Speranza did not state when the new decree would come into force, but said it would cover the period until January 31st – with several measures only in place until New Year’s Eve.