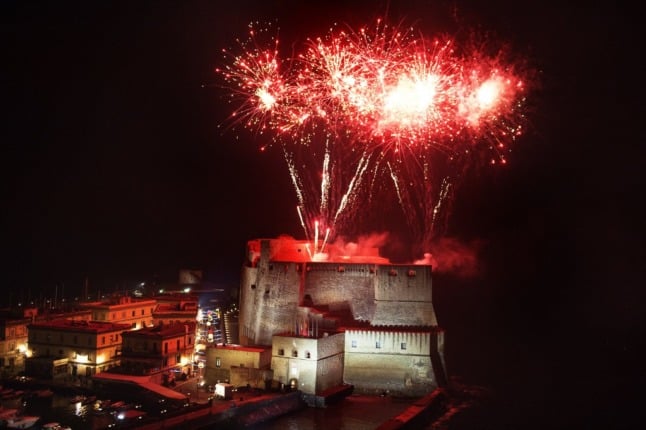 There won't be any New Year's Eve celebrations in Naples this year due to Covid restrictions. Photo by ANNA MONACO / AFP

Outdoor masks, empty squares and Christmas lights no longer aglow: plans for Capodanno have had to be scaled back in some of Italy’s biggest city’s this year.

In response to the increasing Covid case numbers throughout the country, the Italian government has called a meeting on Thursday to discuss potential new measures.

However, while it’s not yet known if the government will introduce any major new restrictions over the Christmas and New Year holiday period, some cities have already imposed their own restrictions and begun cancelling events.

Q&A: What will Italy’s Covid restrictions be this Christmas?

And while many people in Italy still intend to go ahead with their Christmas travel plans – over half of Italians (52 percent), in fact, with 24 percent having already booked, according to one survey – some eight million people have instead cancelled their reservations following the rise of the Omicron variant.

Here’s how things look at the moment for events and restrictions in some of Italy’s biggest cites and destinations.

Italy’s playground of the rich and famous will be closed for New Year’s Eve this year, according to an order passed by the region of Campania’s president, Vincenzo De Luca.

The rules prohibit public events in squares across the whole region from December 23rd to January 1st.

Therefore, there will also be no parties in Capri’s famous main square, the ‘piazzetta‘, which is usually decked out in lights and the scene of corks popping at midnight.

The island will also see its hotel doors close to the public in the hope that a break from tourism will bring contagion rates under control.

READ ALSO: Should I travel within Italy or abroad this festive season?

The hotel and tourism association of Capri, Federalberghi Capri, claimed that this decision was taken some time ago and is not linked to the Campania region’s order.

Its president Sergio Gargiulo told Italian news site Agenzia Italia, “We had already thought of closing for this period, also because it is difficult to reopen for just a few days. We would have to keep prices very high to cover fixed and staff costs.”

“Better to close now and not in the summer. We are coming from a very good summer season and we hope to do even better in 2022, hoping that there will be no repercussions from the fourth wave,” he added. As the regional capital of Campania, Naples is also affected by this order. This means that “it is forbidden to hold events, parties or other demonstrations that may give rise to gathering or crowding,” according to the rules signed by De Luca.

Mask wearing outdoors is also obligatory, “in any place that is not isolated”, which includes town centres, squares, waterfronts during crowded hours, queues, markets, fairs and public transport, for example.

Also in a bid to prevent crowds forming, bars and other catering establishments are prohibited from selling alcoholic and non-alcoholic beverages, excluding water, on a takeaway basis from 11am until 5am.

All towns and cities must follow this Covid protocol, which therefore includes Salerno, Giugliano in Campania and Torre del Greco, for instance.

There is no annual Christmas market in Piazza Navona this year and Rome’s New Year’s Eve concert at the Circo Massimo stadium, an ancient Roman chariot racing track often used as a modern day outdoor events space, has also been cancelled.

The city’s councillor for major events, sports and tourism of Rome, Alessandro Onorato, said, “Everything was ready to celebrate New Year’s Eve in style and bring Rome back to the centre of major events,” reported Italian newspaper Il Giorno.

“But at this time our priority is and must be to safeguard the health of people in Rome and avoid gatherings that could aggravate a pandemic situation that, although under control, presents worrying aspects,” he added.

Mandatory mask wearing outdoors is already in force in Rome, which is set to extend to the whole region of Lazio from December 23rd. Party celebrations on New Year’s Eve have been cancelled in the city’s Piazza Bra, while authorities have reportedly begun to refund the approximately 200 people who had already registered for the ‘New Year’s Eve Together’ event.

“We waited until the last possible moment, but the numbers of contagions in recent days and the forecasts made by scientific experts led us to make these prudent choices,” said Mayor Federico Sboarina.

Verona is in the region of Veneto, which turned into a ‘yellow’ zone on Monday, along with Liguria, Marche and the autonomous province of Trento.

The requirement to wear masks outdoors was already in force in Verona from December 18th, which is now mandated throughout the whole region.

According to Milan’s mayor Beppe Sala, the city has “already limited” events and celebrations for New Year’s Eve “while at the same time sending out signals of caution,” reported Milan’s Corriere Della Sera.

“I don’t know what more can be done beyond respecting the measures taken,” he added.

Lombardy narrowly missed becoming a ‘yellow’ zone this week amid worsening health data, while the city of Milan has already taken stricter health precautions such as outdoor mask wearing.

“I advise everyone to be careful at conferences, dinners and celebrations because the mask is removed in these cases and this makes all the difference,” the mayor stated.

A New Year’s Eve celebration in Bologna’s Piazza Maggiore has also been cancelled, according to news agency Ansa.

“At a time when contagions are on the rise again and when we ask everyone to vaccinate and protect themselves… We must avoid opportunities for potential contagions or inconsistent situations,” stated the city’s mayor Matteo Lepor.

“We are certain that the people of Bologna will show their maturity at this time too, cooperating to ensure that New Year’s Eve is a night of peaceful and safe celebrations, avoiding crowds,” he added.

In the wider region of Emilia-Romagna, other cities have also cancelled their usual celebrations in squares to bring in the New Year.

Parma and Reggio Emilia have cancelled their New Year’s Eve celebrations in the main squares, while Rimini has decided not to hold its traditional festive music concert, Concertone.