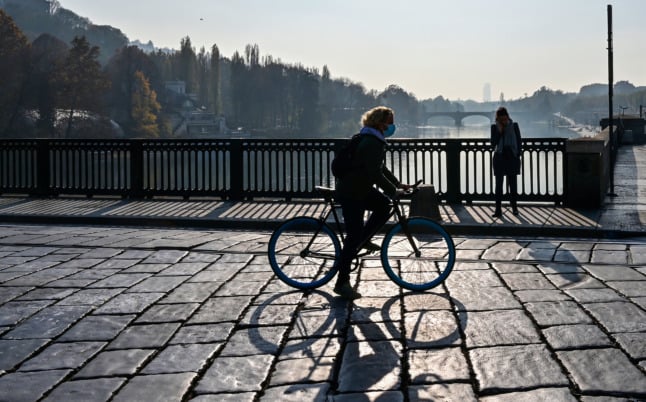 A woman rides a bike in downtown Turin, Piedmont: one of the Italian regions becoming an 'orange' zone on Monday. Photo: MIGUEL MEDINA / AFP

Meanwhile Puglia and Sardinia, two of the five Italian regions that had until now had remained in the least-restricted ‘white’ zone, will be under ‘yellow’ zone restrictions from Monday.

READ ALSO: EXPLAINED: What are the rules in Italy’s Covid ‘orange’ zones?

Abruzzo, Friuli Venezia Giulia, Piedmont and Sicily will join Northern of Val d’Aosta in the ‘orange’ zone. Only three regions – Umbria, Basilicata and Molise – remain in the least restricted ‘white’ zone from Monday, with the remainder of the country in the ‘yellow’ zone.

These figures are released daily by Agenas, Italy’s National Agency for Health Services, and provide a useful indication of where each region is likely to be headed.

As of Thursday (the most current dataset available), Abruzzo, Friuli Venezia Giulia, Piedmont and Sicily had all approached or exceeded the ‘orange’ zone parameters of 150 Covid cases per 100,000 inhabitants, 20 percent ICU and 30 percent general ward Covid patient occupancy, the figures show.

Abruzzo now has 22 percent ICU and 32 percent general hospital ward Covid patient occupancy, while Friuli Venezia Giulia’s figures for the same parameters stand at 23 percent and 34 percent, Piedmont’s at 23 percent and 30 percent, and Sicily’s at 20 percent and 37 percent. All of Italy’s region’s currently exceed the case limit threshold.

Italy's tiered system of localised Covid restrictions was first introduced in November 2020, and was initially used to place tighter limitations on movement in areas where the risk of contagion and pressure on hospitals was deemed dangerously high.

Recently, however, the system’s usefulness has been called into question amid increasing reliance on the use of vaccine passes in Italy and rule changes which mean restrictions in white and yellow zones are now the same, while rules only change in an orange zone for people who are unvaccinated.

It is now necessary to present a 'super green pass' health certificate, available only to those who are vaccinated against or recently recovered from Covid, to access most services and venues in Italy, including public transport, sports facilities and restaurants.

From the start of next month, a 'basic green pass', which can also be obtained via a negative Covid test result, will additionally be required to enter most shops and to access post offices, banks, and public offices (the basic green pass requirement has been in place specifically for hairdressers and beauty salons since January 20th).

As these rules apply nationwide, the unvaccinated (or unrecovered from Covid) face strict constraints even in the 'white' zone, while those with a vaccine pass will experience little change to their daily lives even with a transition to 'orange' zone rules.

Only in the 'red' zone, which in effect imposes a full lockdown, does life substantially change for 'super green pass' holders - leading some commentators to describe the tiered colour system as obsolete in all but the most extreme circumstances.

Early this week, Speranza said he intended to open a discussion with regional authorities "to address issues" with the system, while Health Undersecretary Pierpaolo Sileri has reportedly said the rules “will be modified and relaxed very soon”.

Speaking on Friday, President of the Lombardy Region Attilio Fontana suggested that a conference between regional heads and the government would be held next week instead, adding that the zone system “is a little out of date”.

“It was useful at a certain stage and now I think it needs to be modified,” he said. “The virus and its way of expanding are different, and the situation of citizens, who are largely vaccinated, is different. We must try to adapt to the new situation.”