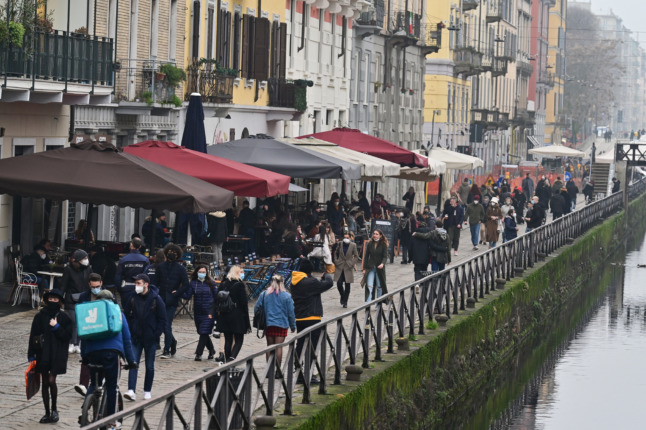 Italy has been under a system of regional Covid restrictios since November 2020. Photo: Miguel MEDINA / AFP

All of Italy’s 21 regions and autonomous provinces will retain their current ‘zone’ status for another week under Italy’s system of Covid risk classification, Health Minister Roberto Speranza confirmed.

“I’m not signing an ordinance today: no region will change colour,” Speranza told reporters in parliament on Friday evening during a vote in Italy’s presidential election.

The regions are currently classified as follows:

The decision as to which zone each region is in is made based on analysis of weekly data relating to infection rates, and the percentages of both intensive care beds and regular hospital beds occupied by Covid patients.

Italy's tiered system of localised Covid restrictions was first introduced in November 2020, and was initially used to place tighter limitations on movement in areas where the risk of contagion and pressure on hospitals was deemed dangerously high.

Previously, the system meant that areas in the ‘white’ zone were under the most relaxed rules, and ‘yellow’, ‘orange’ and ‘red’ zones were under increasingly strict measures aimed at containing the spread of the virus.

But the system’s usefulness is increasingly being called into question amid Italy's increasing reliance on the use of vaccine passes instead, and recent rule changes which mean restrictions in white and yellow zones are now the same while rules only change in an orange zone for people who are unvaccinated.

It is now necessary to present a 'super green pass' health certificate, available only to those who are vaccinated or recovered, to access most services and venues throughout Italy, including public transport, hotels, tourist and cultural sites and restaurants.

From February 1st, a 'basic green pass', which can also be obtained via a negative Covid test result, will be required to enter all 'non-essential' shops and to access post offices, banks, and public offices, as well as hairdressers and beauty salons.

As these rules apply nationwide, the unvaccinated (or unrecovered) face strict constraints even in the 'white' zone, while those with a vaccine pass will experience little change to their daily lives even with a transition to 'orange' zone rules.

Only in the 'red' zone, which in effect imposes a full lockdown, does life substantially change for 'super green pass' holders - leading critics to dismiss the tiered colour system as obsolete in all but the most extreme circumstances.

After weeks of speculation that the four-tiered system is about to be scrapped, Italy's government confirmed last week that it would hold talks with regional authorities with a view to revising the system.

On Friday, newspaper Corriere della Sera reported that deputy Health Secretary Andrea Costa had said all aspects of the system apart from the 'red' zone would be scrapped.

The government has not yet confirmed the changes, however. An official announcement is expected in the coming days.