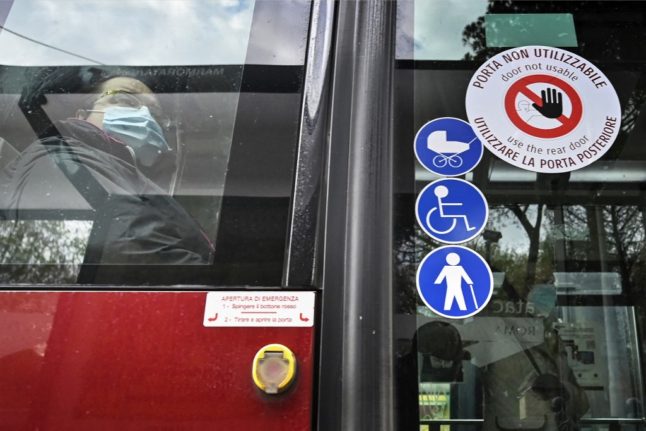 A passenger wears a face mask on a public bus in Rome. Italy’s government is set to decide by the end of April on whether masks will remain mandatory on public transport. Photo by Alberto PIZZOLI / AFP

Italy has eased many of its pandemic-related measures in recent weeks, and masks are no longer a requirement in most outdoor public areas.

READ ALSO: When do you still have to wear a mask outdoors in Italy?

The government is now expected to lift almost all remaining rules by mid-June, with a decree issued in March stating that the current mask mandate for indoor public areas is set to end on April 30th.

But Health Minister Roberto Speranza said last week that the decision was not final, and that the changes would be confirmed “in the last ten days of April”, based on the current health situation in the country.

With the government now considering whether to drop the mask mandate, a junior minister suggested on Wednesday that the rules may stay in place longer than expected – at least in some situations.

“I’m convinced that it would be right to go from an obligation to wear masks in enclosed spaces to a recommendation, keeping them in some places such as on public transport,” Deputy Health Minister Andrea Costa said in an interview with Rai News 24.

“The decree in force at the moment removes the obligation to wear masks for everyone [from May 1st],” he said.

“Now it’s a question of evaluating whether to keep them in some special situations, where there is a higher concentration of people.”

At the moment, Italy still requires masks to be worn in all indoor public places – including in shops and on public transport – and in crowded outdoor areas.

The legal obligation to wear a mask in all outdoor public places ended on February 11th.

Speranza last week stressed however that masks are still “essential” and a “fundamental safeguard” against the spread of the virus.

“We strongly recommend them on all occasions, even outdoors, where there is the possibility of gatherings,” he said.