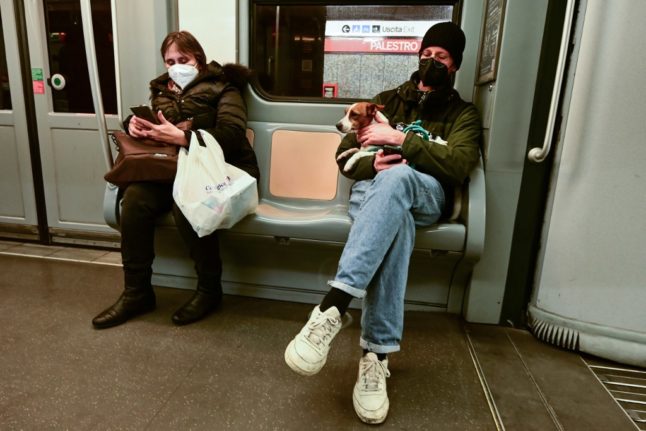 The use of higher-grade FFP2 masks on public transport and at theatres, museums and other venues is currently mandatory in Italy. Photo by Miguel MEDINA / AFP

With ten days to go until May 1st, the date when the obligation to wear face masks indoors in Italy is meant to come to an end, some of the country’s most distinguished health experts have warned against the government’s plan.

READ ALSO: Will Italy end its Covid mask mandate on May 1st?

“The virus is still spreading at a very high rate,” said Nino Cartabellotta, the president of Italy’s foundation for evidence-based medicine, Gimbe, on Thursday.

“The number of positive cases exceeds the 1.2 million mark,” he said, while “the test positivity rate is over 15 percent”.

“Because of that, dispensing with face mask rules would be a very reckless move,” he added.

“If we remove the obligation [to wear face masks] now, we risk sending the message that it is all over. That’s not the case,” he said in an interview with La Repubblica, adding: “The government should reiterate that the situation is still alarming and say how things truly are.”

Health Minister Roberto Speranza said last week that the decision on masks was not final, and that rule changes from May 1st would be confirmed “in the last ten days of April”.

“After Easter … we will conduct a further evaluation with our scientific experts and decide,” he said.

The minister stressed that: “At this moment my very strong recommendation is to use a mask on all occasions when there are risks, because viral circulation is very high”.

With the holidays now behind us, the health ministry is now set to make a definitive decision in the coming days as to whether the obligation to wear face masks in all indoor public places will instead become a recommendation.

There were suggestions earlier this week that the government may now keep the rules in place longer than expected – at least in some situations.

“I’m convinced that it would be right to go from an obligation to wear masks in enclosed spaces to a recommendation, keeping them in some places such as on public transport,” Deputy Health Minister Andrea Costa said in an interview with Rai News 24.

“Now it’s a question of evaluating whether to keep them in some special situations, where there is a higher concentration of people.”

At the moment, Italy still requires masks to be worn in all indoor public places – including in shops and on public transport – and in crowded outdoor areas.

READ ALSO: When do you still have to wear a mask outdoors in Italy?

Italy’s government appears to be relying on the relatively high rate of vaccination coverage in the country to keep serious cases of Covid-19 under control once measures are lifted.

Speranza stressed last week that 90 percent of the Italian population aged over 12 have now had at least the first two doses of a Covid-19 vaccine, while 39 million – more than half of the entire population – have had a booster.

But virologist Massimo Galli described the plan to remove masks indoors from May 1st as “nonsense”, saying it would leave immunosuppressed people “excluded” and “at risk”.

Those who are immunosuppressed “can get all the vaccines they want but would still have partial or no protection,” he said in an interview with Radio Capital on Wednesday.

“If they want to go on public transport, they will wear a mask, but if others do not wear one this person is at risk,” he explained.

Italy currently offers a fourth Covid jab, or second booster, to over-80s and other groups thought to be at the highest risk from the disease. However, Gimbe noted that uptake among these groups has been lower than expected.

Cartabellotta said: “Seven weeks after the start of the campaign for immunosuppressed patients, a coverage rate of 10.2 percent and unjustifiable regional differences prove that the protection of over 790,000 at-risk individuals is simply a mirage for now.”

Gimbe’s report also said 4.2 million people in Italy who are eligible to be vaccinated have still not had their first dose, while another two million had not had a booster.