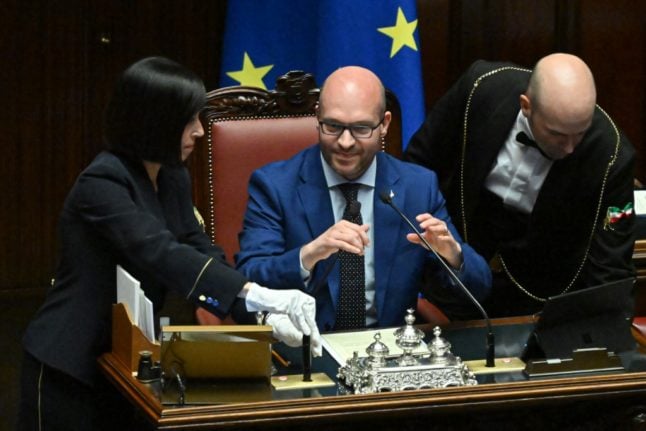 Lorenzo Fontana, a member of the right-wing, anti-immigration League party, was elected new speaker of the lower house of parliament on Thursday. Photo by Alberto PIZZOLI / AFP

The League’s Lorenzo Fontana, long known for his anti-abortion and anti-LGBTQ views, was appointed speaker of Italy’s Chamber of Deputies in a show of unity by the country’s nascent right-wing government coalition, after the squabbling alliance agreed on a temporary truce.

The choice of ultra-Catholic Fontana was slammed by Italy’s largest LGBTQ+ rights group Arcigay, which said he supports “ultra-conservative, homophobic (and) misogynist movements”.

The group also accused Fontana, a close ally of Matteo Salvini, of having “always used Putin’s Russia as a cultural and political model”.

Fontana has previously described same-sex couples as “una schifezza“, meaning ‘rubbish’ or ‘trash’, and as Families Minister in 2018 said he aimed to give doctors greater liberty to dissuade women from seeking abortions.

He has expressed admiration for President Vladimir Putin’s Russia, where the state outlaws the public defence of homosexuality and where hate crimes are rife, and said that European women should have more children.

He is also known for voicing support for Greece’s neo-Nazi Golden Dawn party in 2016, has long railed against what he calls the “invasion” of Italy by immigrants.

Members of the centre-left Democratic Party (PD) held up a banner in parliament reading: “No to a homophobic and pro-Putin speaker”.

His election followed Thursday’s appointment of Ignazio La Russa, a veteran of Italy’s post-fascist movement known for collecting fascist memorabilia, as speaker of the Senate. 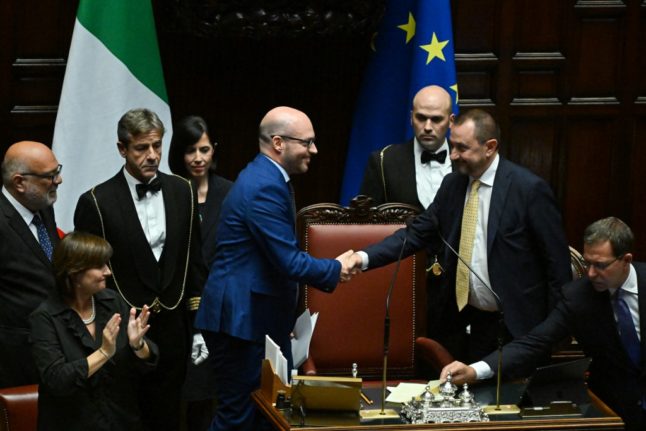 La Russa was reportedly picked by Giorgia Meloni, whose post-fascist Brothers of Italy party won a historic 26 percent of the vote in the country’s September 25th general election.

The new speakers will now take part in discussions with President Sergio Mattarella on the formation of the new cabinet, which is expected to be led by Meloni and should be sworn in by the end of the month.

Earlier on Friday, Meloni said that there was “no time to lose” as Italy, the eurozone’s third-largest economy, currently faces a number of thorny challenges, including soaring inflation and an energy crisis triggered by the war in Ukraine.

READ ALSO: EXPLAINED: When will Italy have a new government?

The soon-to-be new PM can only form a government with the support of her fractious allies, former premier and founder of right-wing Forza Italia Silvio Berlusconi and populist League leader Matteo Salvini.

“We want to give the nation the most authoritative government possible,” she said in reference to the bitter battle to secure key ministerial posts.

On Thursday, Forza Italia boycotted the secret vote in the Senate in a bid to put pressure on Meloni – a move that backfired after La Russa picked up the extra votes he needed from the opposition. 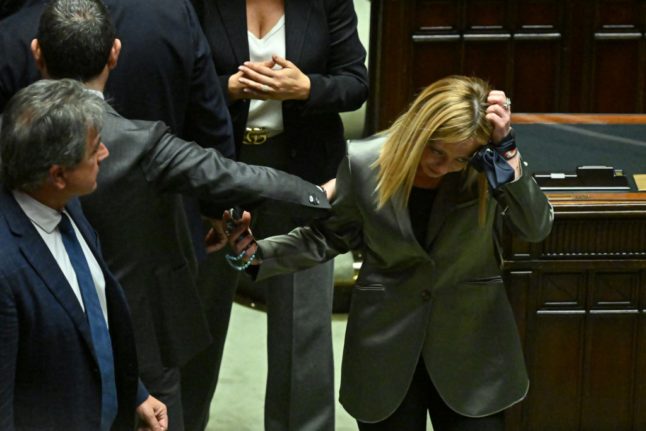 Giorgia Meloni and her allies, Silvio Berlusconi and Matteo Salvini, have been tussling over the formation of the new cabinet. Photo by Alberto PIZZOLI / AFP

Political commentators in Italy’s main newspapers analysed video footage from the election in an attempt at determining who had been inside the voting booths long enough to write down a name. Some also looked to see which way the voters’ feet were pointing as a potential clue.

Salvini said earlier on Friday that the power struggle was just a “bump in the road”, insisting that the new government was ready and would last the course.