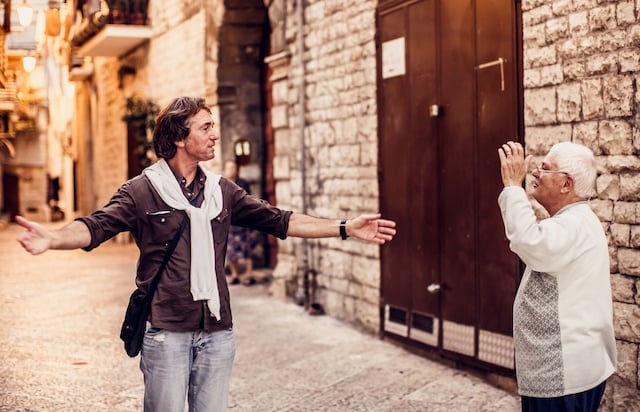 Not all these cheeky Italian expressions will make your nonno blush. Photo: DepositPhotos

You're in the midst of a conversation in Italian when all of a sudden a word for genitalia crops up. Fear not: you might actually have received a compliment.

Italian is a rich language and some of these phrases are a great way to express yourself, whether you want to pull someone's leg, vent frustration or show your appreciation.

But be warned, most of these should still be used with a bit of caution – at least around your boss or in-laws.

This expression literally means that your face is like your bottom. But don’t take offence: it's not an insult, or at least it’s not as bad as it sounds.

If someone has la faccia come il culo it means that they are very direct, brazen even, and have no sense of embarrassment. So for instance if someone takes you out for dinner and you order the most expensive dish because the other person is paying, then you have a faccia come il culo – you've got some 'bare-faced cheek'.

Saying that someone is a coglione ('testicle') means that they are, simply put, stupid, dumb, an idiot.

But you don't want anyone to rompere i coglioni ('break your balls'): like in English, that means they're really getting on your nerves or giving you a hard time. The person responsible is a rompicoglioni, or 'ball-breaker'.

In fact, Italians have something of a fixation on testicles. The synonym palla ('ball)' is another word for 'a drag' and it's common to exclaim “che palle!” ('what balls!') when you really don’t want to do something. Surely a high percentage of Italians wake up on a Monday morning thinking exactly that.

Here we go again. To 'hold someone by the balls' is a visual way of expressing the fact that you have them in the palm of your hand and can make them do whatever you want – you've 'got them by the balls', as we'd say. (If you want to express yourself more politely, you can also say tenere in pugno ('to hold in your fist').)

The verb fottere can mean 'to steal', or more commonly – and vulgarly – 'to sleep with someone' or 'to screw'.

READ ALSO: The best and most creative insults in the Italian language

But as a reflexive phrasal verb, fottersene, it means that you don’t care about something. For instance if someone expresses disapproval of your actions, you might tell them “Me ne fotto” ('I don’t give a damn').

You'll hear this word at least once a day in Italy, often much more. Its literal translation is 'penis', but it is also used as the equivalent of the English F-word.

Swap cazzo for cavolo ('cabbage') if you need a safe-for-work euphemism.

Fica means 'vagina', but unlike English and its off-limits C-word, it can actually be a compliment in Italian.

The masculine form, fico or figo, means 'cool' (as well as being the word for 'fig'). You might describe a concert as fico or even fichissimo if it was really great, while calling someone un fico suggests you think they're 'a hottie'.

Remember to exercise caution when using the feminine form, though, as it might be mistaken for an extremely vulgar way to refer to a woman.

Merda is the Italian word for 'shit', so describing something as di merda is like saying it's 'shitty' or 'crappy'.

You especially don't want to fare una figura di merda ('make a crappy impression'), which is like saying you made yourself look like a total idiot. A more respectable alternative would be una brutta figura ('an ugly impression') or figuraccia ('terrible impression').

Sticking with the toilet theme, cagare is a vulgar way of saying 'to poo'. But it can also mean 'to notice', 'care about' or 'pay attention to'.

For instance: you might complain about the object of your unrequited affections “non mi caga” – 'she/he doesn't care about me'. Or to put it more bluntly, they 'don't give a crap'.

A 'finger in your backside' is something – or someone – that really, really annoys you. As we'd say in English, it's 'a pain in the arse'.

Back to bums again, but this time it's positive. Che culo ('What a bottom!') isn't a compliment about someone’s physical appearance, but means that they were lucky.

If someone wins the lottery, it's culo ('luck') or una botta di culo, 'a stroke of luck'. If it happens to someone who always seems to hit the jackpot, you say that he or she ha culo ('has luck').

Literally 'to take by the bottom', but there's nothing sexual about this expression. It means you're fooling someone, 'pulling their leg' or 'taking the piss'.

There is a more polite version that's safer to use in formal situations: prendere in giro, which literally translates as 'to take [someone] around'.

Can you think of any more? Log in to let us know in the comments section below.