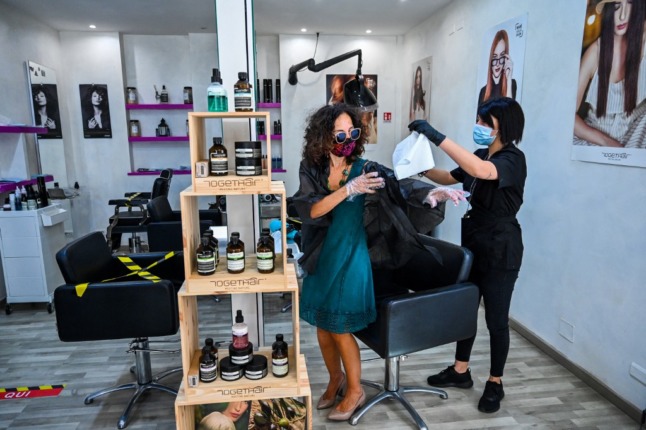 Proof of testing, vaccination or recovery from Covid-19 is now required to visit the hairdressers in Italy. Photo: Andreas Solaro/AFP

From February 20th until at least March 31st, Italy’s green pass (the ‘basic’ version, which is also accessible via a negative test result) is a requirement for entry to businesses in the “personal services” category: namely hairdressers, barbers, and beauty salons.

This change was announced under Italy’s last government decree, published on January 7th, but is only coming into force now as the introduction of many new rules has been staggered.

The same requirement will apply to public offices, banks and post offices from February 1st, the last decree states.

As these rules come in, the government is also set to announce more changes on Thursday – including an extension of the basic green pass requirement to all but the most essential businesses, shops and services.

Ministers are reportedly still finalising details of the latest round of changes to the nationwide health measures under another incoming decree awaited on Thursday, following days of discussion with regional authorities and scientific advisors. According to reports in Italian media, the list of exempt ‘essential’ businesses is expected to include pharmacies, supermarkets, grocery stores, opticians and tobacconists.

Open-air shops and services such as petrol stations, markets, newsstands and kiosks are also likely to be exempt, according to reports.

These new rules have not yet been officially announced and no start date has been confirmed at the time of writing.

Many other businesses and services in Italy already require the ‘reinforced’ version of the green pass, proving vaccination or recovery, including bars, hotels and all forms of public transport.

Italy currently has a two-tiered green pass system in place, with the ‘basic’ version of the pass available to those who test negative, alongside the ‘reinforced’ or ‘super’ green pass which proves the bearer is vaccinated against or has recovered from Covid-19.

The green pass takes the form of a QR code that can be scanned and checked by public sector and service industry workers.

The responsibility for enforcing the rules at shops and businesses falls to owners or managers, who can face fines of up to 1,000 euros for failing to ensure customers have a valid green pass.

The new rules are expected to apply nationwide, regardless of the zone a region is in under Italy’s four-tiered system of risk classifications.

Under the incoming decree, the Italian government is also “reconsidering” the system of white, yellow, orange and red ‘zones’, which has been in place since November 2020.

It’s not yet known whether the tiered system will be altered or scrapped altogether, as the government’s strategy for dealing with the pandemic relies increasingly on vaccinations rather than business closures and lockdown measures.

For the moment, the coloured tier system remains in place with most of the country designated a ‘yellow’ zone as of Monday.